Yes, we are open for online orders and payed orders will be send via courier.
You are welcome to place new orders. 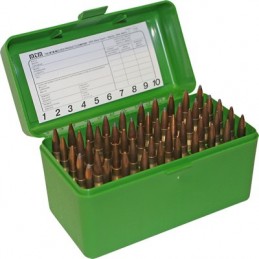 Our traditional line of bullets feature exposed lead tips for controlled expansion and hard hitting terminal performance. Most have our pioneering secant ogive design-one of the most ballistically efficient profiles ever developed. Most feature our exclusive InterLock® design--a raised ring inside the jacket that is embedded in the bullet's core that keeps the core and jacket locked together during expansion to retain mass and energy.

Pioneered by Hornady® for use in hunting bullets, this technology broke new ground in ballistic engineering and is now used in bullets for everything from match to varmint shooting.

The secant ogive is a geometrically developed design that creates the most ballistically efficient profile, yet retains the optimum bearing surface. The combination of the slender point and increased bearing surface results in lower drag, increased stability, flatter trajectories, and amazing accuracy.

No customer reviews for the moment.

16 other products in the same category:

For rifles chambered in 6mm cartridges, the #1530 85 grain hollow point boat tail bullet has proven to be highly effective on medium game, such as deer and antelope, and it is outstanding in this application.

CMJ Bullets The Complete Metal Jacket range from Frontier Bullets is one to look out for if you are shooting any caliber of handgun. CMJ Bullets are world renowned for their superb performance, accuracy and consistency.

Range Master Bullets The newest addition to the Frontier Bullets line, Frontier Range Master Bullets are specifically aimed at the frequent shooter. Precision CNC machined from a high quality brass alloy with a high lead content, these bullets give you supreme accuracy and consistency, while also lowering barrel drag thanks to CNC cut bands.

The Lapua Scenar bullets are the first choice for superior accuracy. The Scenar is an open tip match bullet with a boat tail design, perfect for competetive shooting in a multitude of events. It has a superb track record at mid-range and long range rifle matches and bench rest shooting at an international level. The Scenar bullet comes in a vast selection...